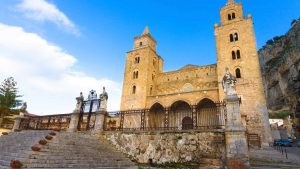 We have chosen a magnificent drive along the northern coast line with wonderful roads overlooking the Ionian sea and over the Eolie’s Islands.
We will stop first and visit Tindaris, which began as a settlement back in the Bronze Age (about 1500 B.C).
The town suffered the effects of a landslide at the end of the 1st  Century AD, and an earthquake in 365 AD. Tindaris was the most important Greek city in this vicinity, though most of what the visitor sees today was constructed during the Roman period.
We will visit the amphitheatre, which was built in the 4th century BC. It has the ruins of simple temples and the so-called basilica, a fine example of Greco-Roman architecture begun in the 4th century B.C. and successively modified for use as a meeting place.
We then take a drive across a wonderful road by the Ionian sea through charming villages, in particular, the famous Santo Stefano di Camastra village, filled of several ceramic shops and colored pottery.
We then get to Cefalù, a charming unspoiled village with winding, narrow, medieval streets and delightful restaurants overlooking a rocky coast.
It is dominated by a huge rock known as “La Rocca” – once the site of a Temple of Diane and one of the finest Norman-Arab-Byzantine Cathedrals.
The Duomo of Cefalù was begun in 1131 by Roger II and it was intended as the principal religious seat in Sicily. Though it failed to fulfill this function, the building’s magnificence has never been eclipsed. Its fine mosaics (1148), which feature an image of Christ Pantocrator in the apse, are often celebrated as the purest Byzantine works of art on Sicilian soil.
Also of interest is the museum “Mandralisca” which houses  an “Antonello da Messina” painting and a collection of coins, ceramics, vases, minerals and shells. very important Christian Sanctuary that sits high on the hill above the city.
It is famous for its black Madonna statue that draws visitors from afar, and gives it its name, the Sanctuary of the black Madonna.