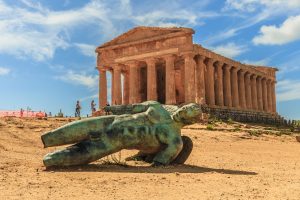 Located on a plateau overlooking Sicily’s southern coast, Agrigento was founded as Akragas around 582 BC by a group of colonists from Gela, who themselves were the immediate descendants of Greeks from Rhodes and Crete.
The area was inhabited much earlier; a female skull (that of the “girl of Mandrascava”) found near Cannatello is half a million years old.
The medieval city of Agrigento is not without a certain charm. High in the historical center of the city, the Romanesque Gothic cathedral, built during the fourteenth century, still displays some of its medieval character, as does the thirteenth-century Church of San Nicola.
Unfortunately, the Saracen fortress believed to have stood at Agrigento has not stood the test of time.
The Greek temples, theatres and ruins, and even the archaeological museums, are located outside the city proper.
Agrigento was destroyed several times during the Punic Wars, suffering particularly extensive damage during a siege by Roman forces in 261 BC, but always rebuilt. The Greek poet Pindar (518-438 BC) described Akragas as “the most beautiful city of the mortals.” Akragas’ most famous citizen was the philosopher and scientist Empedocles (490-430 BC).
In the Valley of the Temples are the ruins of numerous temples but also necropoli, houses, streets and everything else one would expect to find in an ancient city. There is a small amphitheatre, as well as several auditoria, and a fine archeological museum. Unfortunately, most of the temples at Agrigento are in ruins, with pieces strewn about, and several appear to have never even been completed.
Part of the Temple of Juno, built around 450 BC, is still intact. Its style has been compared to that of the temples at Paestum, near Salerno. The Temple of Concord (named retroactively), built around 440 BC, is in far better condition, and at night the illuminated temple is a sight to behold.
A number of telamons (large segmented stone columns in the form of human figures) have been preserved. Our tour will introduce you wonderful landscapes of hillsides with orange and lemon trees, animal farms.
We will arrive in Agrigento to visit the famous Greek Valley of the Temples with several Greek Temples and Tombs “… Giunone, Concordia, Ercole, Giove-Olimpo and so on…” and its unique and world renowned museum of Greek artifacts.
We may have lunch in a restaurant by the beach area of Agrigento, called: San Leone.