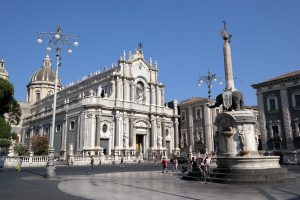 Since the eighteenth century, Catania has been the second most important city of Sicily, supplanting Messina in that respect. Subjected to Etna’s fickle temperament, Catania has been damaged by lava flows and earthquakes on several occasions.

A particularly destructive volcanic eruption in 1669 was followed by a serious earthquake in 1693.

To arrive in Sicily and only enjoy Taormina would be a crime, whilst beautiful, the real Sicily is on your doorstep waiting to be discovered. With Catania you can enjoy a very special lively city which offers a taste of the antique and modern, order and chaos, excellent shopping and Art, History and Culture, Fountains and Squares. We will visit the Cathedral square, the mean street of Via Etnea (named after the volcano), the Roman theatre and so on… We will then stroll the famous open fish market situated in the heart of the city!

We move out of the city to the seaside towns of AciCastello and AciTrezza, two pretty coast line Sicilian villages. AciCastello boasts a rich production of citrus fruits, olives, grapes, almonds, cereals and amazing restaurants.
AciTrezza is a small but charming fishing village, with its small harbor full of fishing boats and typical fishing trattories. Both of them have a backdrop the famous “Faraglioni” created by lava rock by an ancient sub-marine eruption.

The name AciCastello derives from the homonymous Castle situated on a nearby hill of lava rock, built by the Normans in 1076. Approximately in 1170, it was completely destroyed by a devastating earthquake, and was repopulated no sooner than 1530. The most architecturally interesting monument is the Norman Castle, today home to a Museum, built with lava rock from Mount Etna. We then make our way to Acireale which is situated on a flat stretch of lava high above the Ionian Sea. We will visit the Duomo square with its wonderful Baroque palaces and churches, in particular, the Duomo itself and the church of St. Peter & St. Paul and San Sebastian.

We stroll the main street, arriving at the Public gardens with its beautiful view over the volcanic “Timpa” and the Ionic sea.