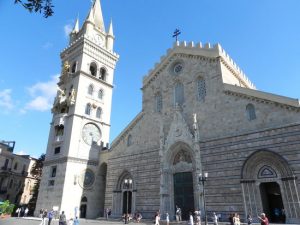 Messina has been the victim of both earthquakes and World War II bombing and still stands to tell the story of its impressive past, with some beautiful and important architecture and museums. The MuseoRegionale houses treasures that include works by Antonello da Messina and Caravaggio.The most important monument in Messina is the Cathedral, which was erected during the 12th Century Norman dominion and its style resembles that of both the Basilica of Saint Nicholas and the cathedral at Bari. Most of the present cathedral is actually a reconstruction, the original building having been almost entirely destroyed by earthquakes;
a few segments of the original walls remain. At noon we can enjoy a the very special movement of the astrological clock.
We will then drive and visit Tindaris which began as a settlement back in the Bronze Age (about 1500 B.C).
The town suffered the effects of a landslide at the end of the 1st  Century AD, and an earthquake in 365 AD. Tindaris was the most important Greek city in this vicinity, though most of what the visitor sees today was constructed during the Roman period.
We will visit the amphitheatre , which was built in the 4th century BC. It has the ruins of simple temples and the so-called basilica, a fine example of Greco-Roman architecture begun in the 4th century B.C. and successively modified for use as a meeting place.  We will also see the very important Christian Sanctuary that sits high on the hill above the city.
It is famous for its black Madonna statue that draws visitors from afar, and gives it its name, Sanctuary of the black Madonna.